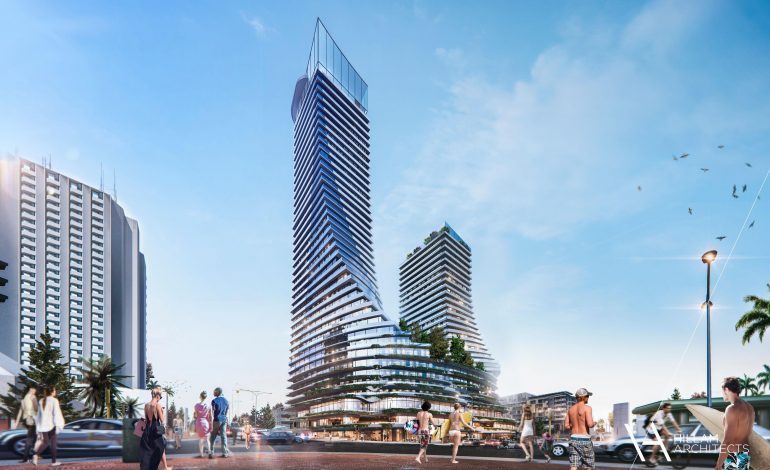 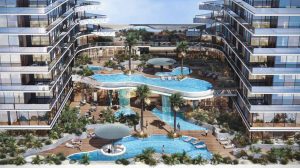 $450 million twin-tower high-rise development in Scarborough has been given the green light.

A revised version of the development, which reduced its overall size in part by cutting the number of apartments and hotel rooms, has received development approval from the Metropolitan Redevelopment Authority.

It comprises a 43-storey and a 33-storey tower, a 119-room hotel and 314 apartments. The top floor will include an art gallery and café.

The original plan for the site was knocked back by the MRA in December amid concerns it was too big. Its size and design have been divisive in the Scarborough community.

The original design was rejected by the Metropolitan Redevelopment Authority : Hillam Architects

MRA chair George McCullagh said developer 3 Oceans had worked with architects to improve the design and reduce its impact on the local amenity.

“Our decision came down to alignment with the long term vision and objectives for Scarborough, as set out in the planning scheme, and the future benefits for the redevelopment area in its entirety,” Mr McCullagh said.

“Ultimately in this case the level of discretion required for additional height is appropriate.

“This development will make a significant contribution to the ongoing transformation of Scarborough, building on Government investment and catalysing private development.”

He said such developments “inevitably divide public opinion” and the board considered the “broad range of views” from residents, businesses, visitors and tourists.

Developer 3 Oceans welcomed the decision and said it hoped to start construction in January.

“Whilst we were disappointed that the original proposal was refused in late 2017, we have worked hard to respond to the issues raised by the MRA through a collaborative, productive and rigorous mediation process,” the company said in a statement.

“The new design is reduced in scale, gives a higher level of consideration to its coastal location and has achieved design excellence status from the design mediation group.

“Importantly it will create 2,200 jobs during construction and over 700 permanent jobs in Scarborough.”

The MRA approval received an angry response from community group Sunsets Not Skyscrapers, which has opposed the development.

The group last week took a petition to the MRA with 1500 signatures from people concerned about the use of discretionary powers that allowed the development to go significantly higher than local design guidelines would ordinarily allow.

“This decision will open the floodgates for more skyscrapers along our coastline changing it forever,” group spokeswoman Lisa Thornton said.

The Tourism Council of WA said the development would boost Scarborough’s appeal as a destination. It put the development’s economic impact at $155 million.

$450m Scarborough Towers ‘Slimmed Down’ in Light of 2017 Rejection

Chinese developer 3 Oceans Property has returned from the drawing board with a new design and development concept for their controversial “Iconic Scarborough” proposal, after receiving an initial thumbs down from the Metropolitan Redevelopment Authority.

The plans would see the developer repurpose the Contacio nightclub site in the Perth beachside suburb of Scarborough, where they originally planned to build a two-tower development of 43- and 35-storeys, with 345 apartments and 159 hotel rooms.

In late 2017 the MRA rejected 3 Oceans’ plans on the grounds that it constituted “significant overdevelopment of the site”. 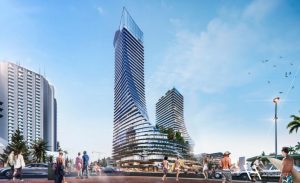 “In response to the MRA’s original comments around overdevelopment of the site, it has always been clear that height was not considered the central issue but more so the scale and configuration of the podium and the base of the towers,” the developers said in a statement.

“These elements are substantially reduced in size and impact and the public uses through the base of the building have been reorganised.

“Also, the appearance of more slender towers providing better view corridors sitting atop-of rather than blending-in with this significantly scaled back podium is proposed.” 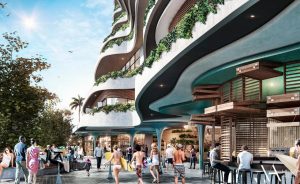 The slimmer tower forms result in the total number of apartments being trimmed down from 345 to 324. Hotel accommodation has also been reduced from 159 rooms to 148 rooms.

The revised proposal reduces site coverage to 72 per cent, down from 80 per cent together with overall car parking reduced from 834 to 750 bays.

Also being cut from the proposal is a pedestrian bridge, which provides access to the beach over the busy West Coast Highway.

“3 Oceans, in line with their investments in Western Australia, always intended that the development will have a significant impact on WA’s tourism industry,” the developer said.

“Through the mediation process we have now included an even greater focus on tourism benefits with dedicated space allocated to a WA Coastal Experience Centre and a WA Market Hall showcasing the best of WA produce.” 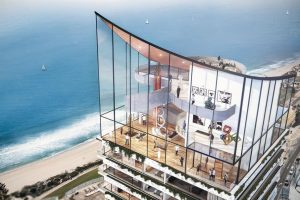 Western Australia’s Premier Mark McGowan made headlines this week publically backing the Scarborough project for the second time however acknowledged it has to go through the MRA’s approval process first.

Earlier this month, MRA-LandCorp chairman George McCullagh called for an end to the culture of secrecy surrounding the MRA.

McCullagh told The West Australian the merged entity wanted to “open the doors” to improve transparency for developers it worked with.

“We have to do some work on the culture of planning inside the approval processes of these joint organisations,” he said.

“What we want to do is to bring a much clearer, crisper triage to the front end of the planning cycle so that we can talk to the proponents, developers and investors around the planning framework and … start de-risking projects much earlier.” 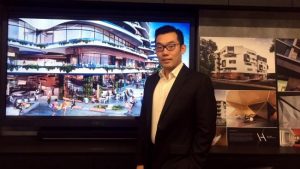 MANAGING director of 3 Oceans Dyno Zhang last weekend took to the surf at Scarborough with a “vocal local” opposed to his 40-level twin tower plan.

It might not be straight from the standard developer’s playbook — and no, he didn’t “get up” though it was close — but it does go some way to backing his claim that he is listening and cares about community feedback.

“We might not agree,” Mr Zhang said. “But that doesn’t mean we can’t be friends.”

Already Mr Zhang says he favours modifying the design of his landmark 40-storey twin tower with a three-level observation deck to make it less of an exclusively high-end international tourism drawcard and to incorporate some specifically Scarborough beachside elements, maybe waves or even surfboards, into the tower design.

The ambitious $400 million plan for the Contacio bar site on the corner of West Coast Highway and Scarborough Beach Road — to house Perth’s first beachside convention centre, a 180-room, four-star hotel and 300 apartments — is not one-way traffic.

Mr Zhang also has to convince his international stakeholders that they should invest in Perth and not elsewhere, and he has to pay for an estimated $50 million in community benefits — public access to 4000sqm of food and drink and shopping on the ground and first floor, another 1000sqm over three levels of observation deck, a 350 bay public carpark, and a pedestrian bridge across the West Coast Highway intersection.

“I want to change the perception that developers are greedy and don’t care,” he said.

“On the rooftop, I could easily fit in one or two fancy penthouses, that’s $15 million, $20 million, but I chose not to, I’m giving it to the public.”

Locals have raised concerns about height and shadows, traffic, noise and more people.

Every development, he said, had pros and cons but 3 Oceans was at least setting the “public benefit bar” fairly high. He said if others wanted 40-level towers they should also dig deep.

“A property developer like us doesn’t come along often,” he said. He hopes to apply for development approval by midyear.

* Photos provided by development for illustration purposes only