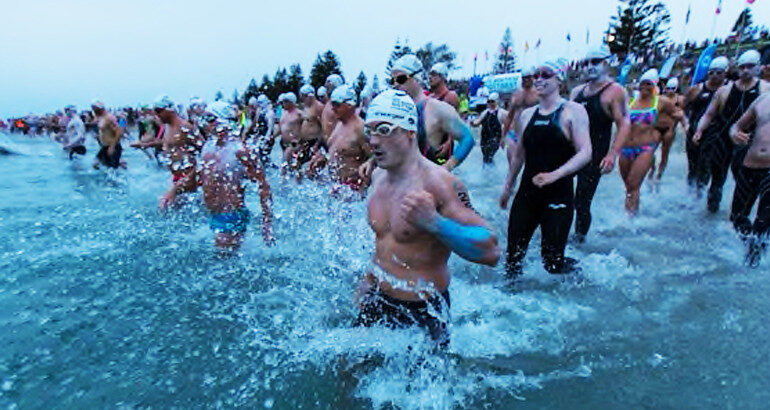 The annual 19.7km open water swim from Cottesloe Beach to Rottnest Island is scheduled every February.

Thousands of swimmers participate every year in this famous popular Rottnest Channel Swim.

Some swimmers do not start at the Start Line (with team members and duo members on boats), it will be impossible for South32 Rottnest Channel Swim volunteers to check everyone’s vaccination certificates before people cross the finish line.

Support crew, spectators or anyone else attending the event in any capacity should be prepared to present their vaccination certificates and valid ID whilst in event areas.

Rottnest Channel Swim Association executive officer Nic Blackburn said they expected a few late withdrawals as participants had been advised to send their proof of vaccination in November and given a few days to choose to a refund instead.

“They were given the opportunity to get a refund if they weren’t going to get vaccinated,” he said.

“Essentially what all the participants would do is upload their certificates prior to the event.

“We are in the process of checking all of those at the moment, so the majority of that work is done prior to the actual event day.”

The WA Government announced it would ease its hard border controls, in line with a 90 per cent vaccination rate, from February 5.

“An outdoor event by nature is quite spread out.

“Given that the borders are opening, we’re hopeful that we can welcome back our interstate and international swimmers, which we had a handful of.

“We would normally see anywhere up to 18-20 different countries represented and this year we’re going to have a couple.”

The open water swim event is one of the few which remained uncancelled in the past couple of years.

“In 2020 when we ran, COVID was just a whisper in the breeze so we managed to escape unscathed,” Mr Blackburn said.

“Then in 2021 we restricted entries to just Australia, just because the time of entries (registration) is when borders opened with the east coast.

“Just before the event, we had a few State by State border restrictions but people actually drove their car through South Australia.”

Its a massive weekend for all concerned & WA is proud to have a local unique world class event now 3 decades of history.