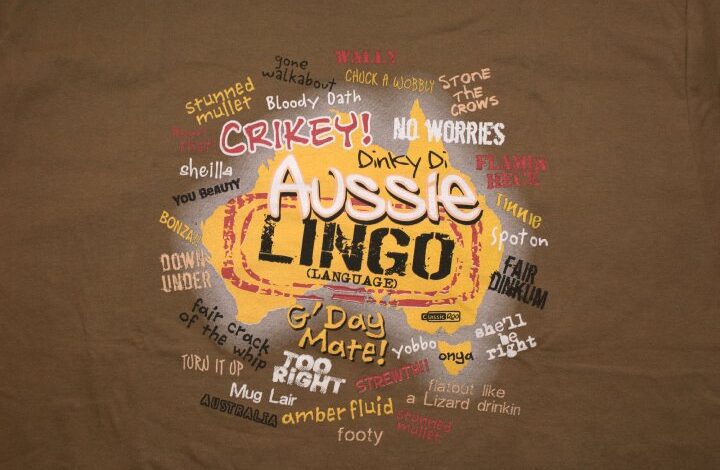 This is an introduction to Australian sayings, phrases, slang expressions.
There is a way of describing most things but the way it can be said by some old Aussie adjectives can be hilarious. Like an ironic riddle the Aussie way is to be that little bit larrikin not taking life too seriously.
Taking the piss out of everything...

Fair go, mate.
Fair suck of the sauce bottle. Fair crack of the whip
Made famous by the ill-fated former Prime Minister Kevin Rudd, who enjoyed using Australian slang to speak to the electorate and often pleaded for a “fair suck.” The phrase generally means that you want to be treated fairly.

“Fair suck”
was coined by struggling Australian families who shared droppings of tomato sauce to flavor their meat. Such was the hard life that all they wanted was an equitable suck. In the fields, they needed a “fair crack of the whip.” Fair go, mate.

“No worries, mate, she’ll be right”
Reflects a national stoicism that suggests everything (she) will turn out fine in the end. This being the case, there’s no real point in worrying about anything.

“Have a Captain Cook”
A look, a brief inspection. In apparent honor of the first Brit to map eastern Australia, Captain James Cook, who skippered the HMB Endeavour. After landing at Botany Bay he sailed on past Sydney Harbour. He had a Captain Cook (a look) and liked it.

“What’s the John Dory?”
John Dory is a fish found in Sydney Harbour and it’s great grilled with lemon and pepper, or deep-fried. It also rhymes with story. So when people want to know what’s going on, or they’re requesting the “goss” (gossip), they ask what the John Dory is.

“Tell him he’s dreaming”
Given air time by Michael Caton in “The Castle:” when you advise someone involved in a business transaction to tell their counterpart that he’s “dreaming,” you’re suggesting that the other side is not offering a fair deal.

“Dog’s breakfast”
Messy, but doesn’t refer to food. Often used by parents to describe their kids’ chaotic lives. Not in order, a shambles, no thought, just a bit of everything. A “dog’s breakfast.”

“Ripsnorter”
Someone playing a good game of sport (having a “blinder”), or something that’s exceptionally good. Can also be “bonza” or “beaut.”

“Buckley’s chance”
William Buckley was Australia’s very own Robinson Crusoe, a man who escaped a convict ship during the first attempt to settle Melbourne in 1803. Three decades later, colonials returned to find a tattooed, two-meter tall, long-bearded man with half Aboriginal children who spoke tribal tongue. He picked up English within days.
Related content [referenced from Insider Travel Guide Aust]
Buckley, who was given a pardon and used as a peacemaker between whites and blacks in the mid 1800’s. Buckley’s local knowledge led settlers to indigenous tribes throughout modern-day Victoria. He advocated cooperation with Aboriginals. After the 1840s decade of indigenous slaughter saw locals massacred, it was said that he had “Buckley’s chance” of making peace. Buckley spent the latter part of his life as a poor loner in Tasmania. There was a concerted lobby for the government to give him a pension for his service to the colony. Once again, he had “Buckley’s.”

Pull the wool over your eyes
Similar to “I’m so hungry I could eat a horse and chase the jockey,” this one derives from the bush. A history of “earning a buck” around woolsheds meant people had to give an honest day’s work (“eight hours’ work, eight hours’ play and eight bob a day” chanted the union movement).
Australians had to be genuine with each other so they could all get their “fair share” of “spuds” (potatoes). If someone is being a little “sheepy,” dishonest, or “spinning a yarn,” they are trying to “pull the wool over your eyes.”

Dog’s eye
There’s much conjecture about what really goes inside the national staple, a meat pie. Is it beef? Kangaroo? The important thing is that it rhymes. So when you’re having a pie, it’s looking back at you, in a canine kind of way. It’s a dog’s eye. Could that really be the runny meat filling?

G’Day! – Hello
was the greeting at from the Opening Ceremony of the Sydney 2000 Olympic Games.

Bastards
Often used to refer to the British, or anyone who doesn’t play fair. The last Australian to be shot by an English firing squad in the Boer War, Breaker Morant, famously shouted his last words: “Shoot straight, you bastards!”
During the infamous 1932-33 Bodyline cricket series, English captain, Douglas Jardine, walked into the Australian dressing room to complain about being called a bastard. An Australian cricketer supposedly asked his team: “Which one of you bastards called this bastard a bastard?”
In politics, a third party, the Australian Democrats, was formed in the 1970s to “keep the bastards honest.”

Toads, banana benders, cockies, sandgropers, crow eaters
These are favorite ways Aussies disparage those who live elsewhere. Tropical Queensland has many more bananas and cane toads than people, so they’re branded banana benders or cane toads. Queenslanders get their own back, calling Sydneysiders cockroaches in honor of the omnipresent, nuclear-immune pest found around the harbor city. South Australians — particularly early settlers — partake in the delicacy of crow eating, while Western Australians spend their lives groping sand (sandgropers).

Ocker, yobbo
The loudmouth who’s a larrikin, who likes the sound of his own voice, is a yobbo — often a bit of a troublemaker. A yobbo typically has a deep Australian twang to his accent, in which case he’s an “ocker.”

Put a sock in it
Tells somebody to “shut up.”

Throw a shrimp on the barbie
“Throw another shrimp on the barbie!”
In a regression to stereotype, Paul Hogan introduced the world to this phrase and in the process invited countless tourists to come over. Australians aren’t in the habit of cooking small people — a “shrimp” refers to a yabby (or more simply, a “prawn”). It’s a way to invite someone to your house for lunch, where you throw a shrimp (or a “snag,” that’s a sausage) on the barbie.

Do the Harry
Harold Holt was the prime minster who disappeared off Victoria’s coast in 1967. He did the bolt, some say, from the responsibilities of the prime minister-ship. Some suggest the (secretly communist) politician was abducted by a Chinese submarine or UFO.
More likely, he was caught in deadly currents and washed out to sea from Cheviot Beach, near Portsea. His body, however, has never been found, so anyone doing a disappearing act is doing a “Harold Holt.” So, when you have to “mosey on,” or “get the hell out of here” you do the “bolt” — the “Harold Holt.” Or simply, you do “the Harry.”

Not pissing on someone when they’re on fire
Means you don’t really care about somebody. Even if they were on fire, you wouldn’t do them the service of pissing on them to put the fire out.

Oi for drongos and galahs
Chanted three times after “Aussie, Aussie, Aussie,” in perhaps the world’s cheesiest national cry. But in normal use, it’s mouthed when you disagree with what someone is doing, or to convey annoyance and get someone’s attention: when you’re being a “drongo” or a “galah” — in fact, not native birds, but someone who has “rocks in their head” — doesn’t know what they’re doing.

Blokes and sheilas
When Julia Gillard was voted in as the country’s first female prime minister, it didn’t take long for Australia to start calling the prime minister’s partner “the first bloke.”

Bushman’s handkerchief
Not really a handkerchief at all, but using your hands to delicately drain the snot from your nose.

Onya bike. Tell your story walkin’
When you don’t want to have anything to do with someone, you tell him or her to get “onya bike,” which suggests he or she leave. Quite the opposite to “hold your horses,” which requests someone to stay, or begs their patience, similar to “keep your pants on” or “don’t get your knickers in a knot.” When you tell someone to get “onya bike,” even if they’re trying to excuse themselves with well-concocted verse, you bid them to “tell your story walkin’.”

Lobster, pineapple, gray nurse
Australians don’t barter with lobsters and pineapples, but most have had at least one friend ring them up (or hit them up at the pub) to lend a lobster or a pineapple.
The $20 note being a sparkling red (lobster) and the $50 note being bright yellow (pineapple) lends itself to the phrase. The $100 note, a blue gray, has now been named after a shark (grey nurse). The less important $5 and $10 notes are often referred to as past international sporting stars — Pam Shriver (fiver) and Ayrton Senna (tenner).

Smoko, garbo, bowlo, bottlo, arvo
An “o” is the suffix to any word it can shorten. If in doubt, throw an “o” on the end of the word and it’s bound to be Australian.
A break when you smoke is a “smoko.” Someone who collects garbage is a “garbo.” A bowling and community club is a “bowlo.” A bottle shop is a “bottlo.” And the word afternoon, with three syllables, just doesn’t stand a chance: it’s evolved/devolved to arvo.

Have a go, you mug
The favored call of those who watch sport from budget seating. Heard at cricket games where batsmen block the ball too much, or football games where the team isn’t being inventive enough in trying to score. Generally refers to anyone who isn’t putting in a full effort or taking any risks.

Cooee
A loud, Aboriginal cry in the “outback” that tells people where you are, assuming they’re within cooee range. So, if you’re not within a cooee of something, you’re nowhere bloody near it.

Gone walkabout
Another piece of language (much like the accent itself) that’s derived from indigenous culture. The natives enjoy going “walkabout,” as do other Australians who enjoy travelling — whether it’s backpacking around Asia or following a harvest at home, they’re going walkabout.

Hit the frog and toad
Different to “having a frog in your throat,” which means having a sore throat. And while some Queenslanders and Territorians organise whacking day outings against the spreading plague of cane toads, it’s not used to describe the ritualized slaying of the dreaded toad. Hitting the frog and toad is when you hit the road. Get out of there. 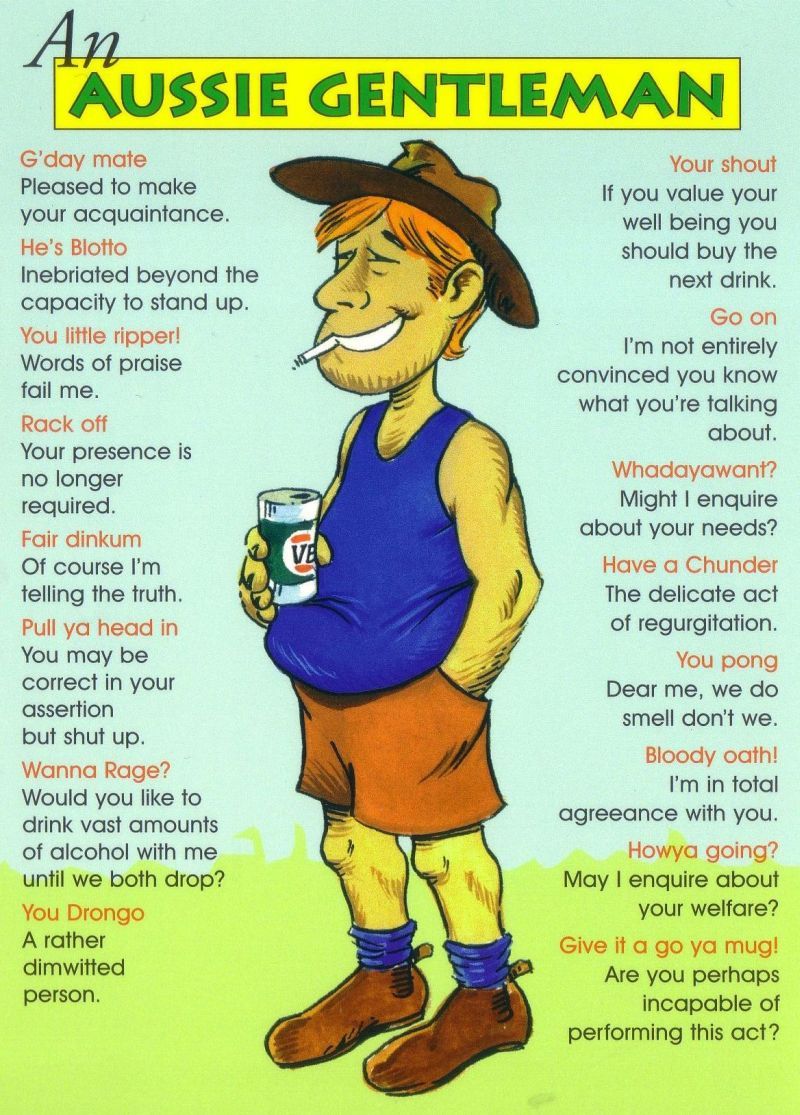